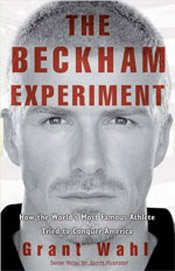 In 2007, David Beckham left the comfort and securiity of European soccer and embarked on a new and risky adventure in the U.S. with the L.A. Galaxy. Sports writer Grant Wahl spent two years following Beckham and the Galaxy. In The Beckham Experiment, he provides the behind-the-scenes drama of Beckham's time on the road in one of sports' most fascinating gambles.