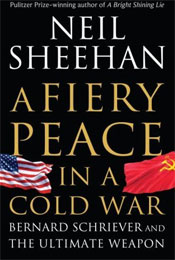 Neil Sheehan, author of the Pulitzer Prize-winning classic, A Bright Shining Lie, tells the story of the nuclear arms race that changed history and the visionary American Air Force officer, Bernard Schriever, who led the high-stakes effort. He details Schriever's quest to prevent the Soviet Union from acquiring nuclear superiority, to penetrate and exploit space for America, and to build the first weapons meant to deter an atomic holocaust rather than to be fired in anger.

A Fiery Peace in a Cold War was named "one of the 10 best books of 2009" by Publishers Weekly.