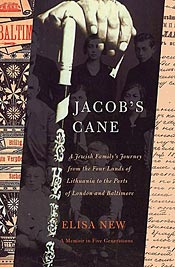 When Elisa New held her great-grandfather Jacob Levy's cane in her hands for the first time in 1997, she realized that her family's story was not the standard coming-to-America tale she had long assumed.

In the mid-1880s, Levy landed not at Ellis Island, but at Baltimore where he soon became a successful businessman and prominent socialist leader. New and her daughter Yael set out to research their family history, from Lithuania to Baltimore to London, and in the process unlocked family mysteries and explained the etching on Jacob Levy's cane.

Elisa New is professor of English and American literature at Harvard University and the author of The Line's Eye and The Regenerate Lyric.