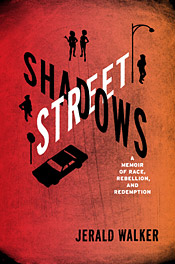 Born to parents of modest means but middle-class values and aspirations, Jerald Walker spent his early years in a Chicago housing project. Drawn to the streets like so many African American boys, he dropped out of school and by his early teens was well on the road to self-destruction. And then came the blast of gunfire that changed everything: his coke dealer friend Greg was shot to death, less than an hour after Walker had scored a gram from him. Walker tells the story of his descent and rebirth in alternating time frames. It is a classic coming-of-age story and an eloquent account of how the past shadows, but need not determine, the present.

Jerald Walker is an associate professor of English at Bridgewater State College in Massachusetts. He attended the Iowa Writers' Workshop, where he was a teaching/writing fellow and James A. Michener Fellow. His work has appeared in Mother Jones, Best African American Essays: 2009, and Brothers: 26 Stories of Love and Rivalry.