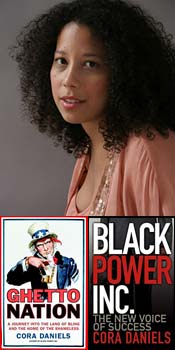 talks about "The Impact of Ghetto Mores, Attitudes and Lifestyles on American Culture."

Cora Daniels is an award-winning journalist and the author of GHETTONATION: A Journey into the Land of Bling and Home of the Shameless and Black Power, Inc: The New Voice of Success. She is currently a contributing writer for Essence, and her work has appeared in numerous national publications. An expert on diversity and business issues, Daniels has served as a commentator on ABC News, CNN, CNBC, BET, NPR, and "The Charlie Rose Show."

Cora Daniels graduated from Yale University, with a B.A. in History, and earned an M.S. in Journalism from Columbia University.

Photo of Cora Daniels by Jamel Toppin, from her Random House author page.

This program is part of the Brown Lecture Series. Additional support has been provided by Alpha Kappa Alpha, Epsilon Omega chapter, in Baltimore.