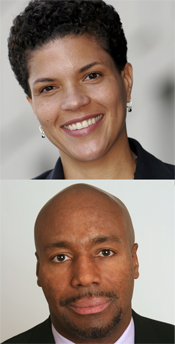 Nearly half of all young black men in America are behind bars, on parole or probation. Legal scholars Michelle Alexander and Paul Butler argue that the U.S. criminal justice system functions as a system of racial control, targeting black men and decimating communities of color.

In The New Jim Crow: Mass Incarceration in the Age of Colorblindness, Michelle Alexander argues that we have not ended racial caste in America: we have simply redesigned it. In the era of colorblindness, it is no longer socially permissible to use race as a justification for discrimination, exclusion, and social contempt. Yet it is perfectly legal to discriminate against criminals in nearly all the ways that it was once legal to discriminate against African Americans -- employment and housing discrimination, denial of the right to vote and educational opportunity, denial of food stamps and other public benefits, and exclusion of jury service.

Paul Butler's book, Let's Get Free: A Hip Hop Theory of Justice, offers a powerful new vision of justice. Americans live in a society fueled by fear and fettered by the lock-'em-up culture that dominates our criminal justice system; we have the highest rate of incarceration in the world, yet our streets are no safer. Part memoir, part manifesto, Let's Get Free takes a fresh investigative look at the dysfunctional politics of our broken justice system and proposes a series of controversial solutions.

A longtime civil rights advocate and litigator, Michelle Alexander was a 2005 Soros Justice Fellow. She served for several years as director of the Racial Justice Project at the ACLU of Northern California. She clerked for Justice Harry Blackmun on the U.S. Supreme Court, directed the Civil Rights Clinic at Stanford Law School, and appeared as a commentator on CNN and MSNBC. She is currently a professor at Ohio State University's Moritz College of Law.

Paul Butler is a former federal prosecutor and the country's leading expert on jury nullification. He regularly provides commentary for CNN, NPR, and Fox News. He has been featured on 60 Minutes and profiled and published in the Washington Post, the Boston Globe, the Los Angeles Times, and The Progressive. Butler is a graduate of Yale University and Harvard Law School. An award-winning law professor, he now teaches in the areas of criminal law, civil rights, and jurisprudence at George Washington University.