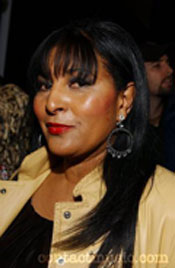 The never-say-die actress/singer/icon opens up and lets the world into her life to witness her triumphs, failures, challenges, and loves -- which include the likes of Kareem Abdul-Jabbar, Freddie Prinze, Sr., and Richard Pryor. She also talks in detail about a couple of well-heeled mystery suitors. This saga of one of the world's most beautiful women, and the overcoming every hurdle that gets in her way, will bring tears and cheers as she survives everything, even a bout with cancer.

Pam Grier began her acting career and achieved fame in the early 1970s when she starred in a number of popular films including Coffy, Foxy Brown, and Sheba Baby. In the 1980s, she worked alongside Paul Newman in Fort Apache: The Bronx, starred in Ray Bradbury's Something Wicked This Way Comes, and earned an NAACP Image Award for Best Actress in a play, Fool for Love by Sam Shepard. In the 1990s her performance as the title character in Quentin Tarantino's Jackie Brown earned her nominations for Best Actress from the Hollywood Foreign Press Association's Golden Globe, the Screen Actors Guild, and the NAACP Image Award in 1997.