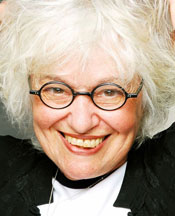 Since drawing her first Sylvia strip in 1979, the nationally syndicated cartoonist Nicole Hollander has channeled her ascerbic wit and razor-sharp sensibilities through the incomparable and irascible Sylvia, a Chicago original whose hilarious commentary on American life has won over millions of readers. Charting 30 years of fashion, food, sexual mores, and political hypocrisy, The Sylvia Chronicles is nothing less than a jaded history of our times.

Nicole Hollander has published 16 collections of Sylvia strips, as well as Female Problems and My Cat's Not Fat, He's Just Big-Boned.