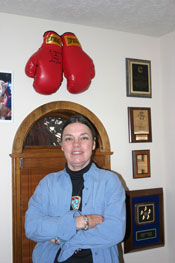 Baltimore native Joe Gans captured the world lightweight title in 1902, becoming the first black American world title holder in any sport. Gans was a master strategist and tactician and one of the earliest practitioners of "scientific" boxing. During his championship reign, he was said to be more famous than Booker T. Washington; yet his legacy to sport and culture is all but forgotten today. Four years after winning the longest bout in gloved boxing history -- a 42-round death match in a Nevada mining town -- Gans died of tuberculosis on August 10, 1910.

Colleen Aycock of Albuquerque, New Mexico, the daughter of a professional fighter, wrote this biography of Joe Gans with coauthor Mark Scott.