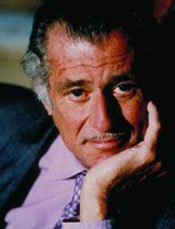 In 2004 when she knows she's dying, Sydney Stringfellow finally reveals to her son what happened long ago during World War II. At the 1936 Olympics, Sydney had fallen in love with a handsome young German. After returning home, she married Jimmy, a kind young Marine who was shipped out to the Pacific theater. Horst, the German, showed up in America, a defector from the Nazis, creating a major dilemma that Sydney would face the rest of her life.

Frank Deford is senior contributing writer for Sports Illustrated, commentator for National Public Radio, and correspondent for Real Sports with Bryant Gumbel on HBO. He is the author of 16 books, including the bestseller Alex: The Life of a Child. Deford is a member of the National Association of Sportscasters and Sportswriters Hall of Fame and a six-time winner of the Sportswriter of the Year Award. He has won a Peabody, an Emmy, and countless other awards. Frank Deford served as chairman of the Cystic Fibrosis Foundation for 16 years and remains chairman emeritus. Born in Baltimore, he now lives in Connecticut.