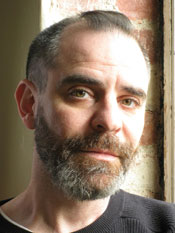 Half Empty, a collection of witty, wise and poignant essays, David Rakoff examines the realities of our sunny contemporary culture and finds that the best is not yet to come, adversity will triumph, justice will not be served, and your dreams won't come true. Ranging from the personal to the universal, the stories come from Rakoff's reporting and his own experiences.

David Rakoff is the author of Don't Get Too Comfortable and Fraud. He wrote for GQ, New York Times Magazine, and other publications and was a regular contributor to Public Radio International's "This American Life."