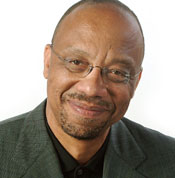 Eugene Robinson won the Pulitzer Prize in 2009 for his insightful commentary on race, President Obama, and the 2008 election. He has reported for the Washington Post for over 25 years and writes a twice-weekly column.

In his new book, Disintegration: The Splintering of Black America, Robinson argues that, over decades of desegregation, affirmative action, and immigration, the concept of "Black America" has shattered, and America's agenda for racial progress has fundamentally changed. Now instead of one "Black America," there are four distinct groups: a mainstream middle-class majority; a large abandoned minority with less hope than ever of escaping poverty; a small transcendent elite with enormous wealth and power; and newly emmergent groups of mixed-race individuals and recent black immigrants who question what "black" even means.