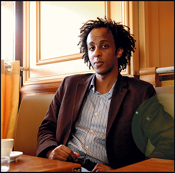 With his first novel, The Beautiful Things That Heaven Bears, Dinaw Mengestu made one of the most impressive literary debuts of recent years. Translated into more than a dozen languages, it garnered awards from around the world, including a "5 Under 35" award from the National Book Foundation.

In How To Read the Air, Mengestu tells an even richer, more complex story of two generations of an African immigrant family and the America which they seek to make their home. Mengestu has drawn on his own background as an Ethiopian immigrant, as well as that of his family, to produce this compelling, multi-layered tale of identity, love, family, revolution, and reconciliation.

Dinaw Mengestu was born in Addis Ababa in 1978 and came with his mother and sister two years later to join his father in Peoria, Illinois. He graduated from Georgetown University and received an MFA in Fiction from Columbia University. He is the receipient of a Fellowship in Fiction from the New York Foundation for the Arts and a Lannan Literary Fellowship.