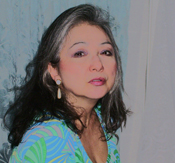 Shiori was born in Tokyo, Japan, six years after the end of World War II. She describes herself as hapa, half-American, half-Japanese. In her first collection of poetry, she weaves memoir and historical record into a lyrical and moving portrait of post-war immigration to the United States.

Shiori's work has appeared in Barrow Street, Cimarron Review, Frogpond, Hawai'i Review, and other publications. Her awards include the Washington Square Review, James Still and Thomas Merton poetry prizes. A contributing editor for the Baltimore Review, she teaches creative writing and journalism at Coppin State University.