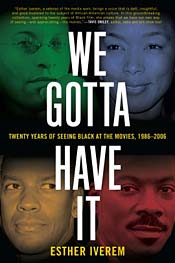 The author talks about her book, We Gotta Have It: Twenty Years of Seeing Black at the Movies, 1986-2006

The year 2006 marked the 20th anniversary of the "New Wave" in black film, that upstart artistic movement beginning with Spike Lee's She's Gotta Have It, which transformed black images on the big and small screen. In the more than 400 film reviews in We Gotta Have It, film and cultural critic Esther Iverem explores how the original new wave pioneers have morphed and branched into all manner and quality of films through the past 20 years.

Esther Iverem is a former staff writer for the Washington Post and Newsday. She is founder and editor of SeeingBlack.com.