The Life and Times of the Honorable Clarence M. Mitchell, Jr. 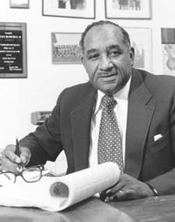 The Greater Baltimore Metropolitan Community celebrates the 100th anniversary of one of the nation's greatest public servants and fellow citizens, Clarence M. Mitchell, Jr. As director of the NAACP Washington Bureau from 1950 to 1978, Mitchell led the struggle for passage of the civil rights laws.

Professor Denton L. Watson, author of Lion in the Lobby: Clarence Mitchell, Jr.'s Struggle for the Passage of Civil Rights Laws, is the featured speaker. Professor Watson is a historical documentary editor and member of the American Studies faculty at SUNY College at Old Westbury on Long Island, New York. He is editing a seven-volume edition of The Papers of Clarence Mitchell Jr. and of the NAACP Washington Bureau.