Home /  Books & More / Live From the Pratt / The rapper Prodigy 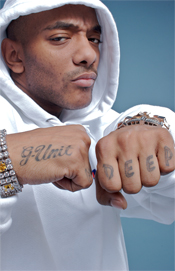 From one of the biggest names in rap during the golden era of hip-hop, Prodigy, one half of the group Mobb Deep (currently signed to G-Unit/50cents label), reveals a hidden side of today's biggest rappers and industry executives. He also provides shocking allegations of police misconduct in the New York City Police Department and talks about his ongoing battle with sickle cell anemia. (Prodigy is a Sickle Cell Anemia Foundation national advocate with "The No Pain Campaign.")

In his memoir, My Infamous Life, Prodigy speaks for the first time about growing up in an illustrious family, his struggles with drugs, and his life-long battle with sickle cell anemia and unremitting hospitalizations. Through Prodigy's eyes we watch the birth of today's most influential musical genres and subcultures. He delivers an unblinking account of his wild life with Mobb Deep who, alongside New York rappers Nas, The Notorious B.I.G., Tupac, Jay-Z and Wu-Tang Clan, changed the musical landscape with their unapologetic street stories.