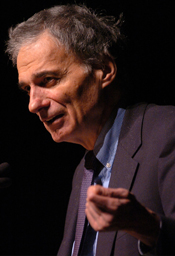 Ralph Nader appeared at the Central Library to launch the paperback edition of his "work of imagination."

Nader calls it a major "speculative work of practical utopia" in which he answers the question: What if a cadre of superrich individuals tried to become a driving force in America to organize and institutionalize the interests of the citizens of this troubled nation? Written by the author who knows the most about citizen action, this extraordinary story returns us to the literature of American social movements -- to Edward Bellamy, Upton Sinclair, and John Steinbeck -- and reminds us that changing the body politic of America starts with imagination.

For the past 45 years, Ralph Nader has challenged corporations, government agencies, and institutions to be more accountable to the public. In 1965, Unsafe at Any Speed changed the face of the automobile industry, gave cars more safety features, and made Ralph Nader a household name. His lobbying and writing on the food industry insured that the food we buy is required to pass strict guidelines before reaching the consumer. One of his greatest achievements was the 1974 amendment to the Freedom of Information Act that gave increased public access to government documents. Ralph Nader has co-founded numerous public interest groups including Public Citizen, Critical Mass, Commercial Alert, and the Center for Study of Responsive Law.