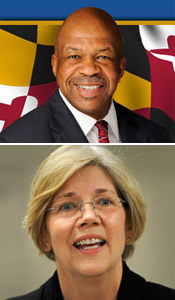 In 2008, Elizabeth Warren took leave from her job teaching bankruptcy at Harvard Law School to oversee the Troubled Asset Relief Program (TARP), the 0 billion bailout of Wall Street banks. In 2010 Congress passed legislation to overhaul how the financial industry is regulated, and President Obama named Warren to a special position helping set up the new Consumer Financial Protection Bureau.

Professor Warren has most recently served as the Leo Gottlieb Professor of Law at Harvard. She was the Chief Adviser to the National Bankruptcy Review Commission and was appointed by Chief Justice Rehnquist as the first academic member of the Federal Judicial Education Committee. She has served as a member of the Commission on Economic Inclusion established by the FDIC. She served as Vice-President of the American Law Institute and has been elected to membership in the American Academy of Arts and Sciences.

Warren has written nine books and more than a hundred scholarly articles dealing with credit and economic stress. Her latest two popular books, The Two-Income Trap and All Your Worth, were both on national bestseller lists.

Elizabeth Warren has been principal investigator on empirical studies funded by the National Science Foundation, the Ford Foundation, and more than a dozen other foundations. She has testified several times before House and Senate committees on financial issues.

Time Magazine has twice named Elizabeth Warren one of the Time 100 Most Influential People in the World; the Globe named her Bostonian of the Year; and the National Law Journal named her one of the Most Influential Lawyers of the Decade. She has been recognized for her work by several other publications and professional groups, including Forbes, GQ and Smart Money.