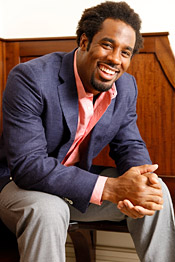 Now in his 11th season in the NFL, Dhani Jones has had an unusually long career for a football player. Just a few years ago, however, Dhani thought his playing days were over. Cut by the Eagles and the Saints, he was at a professional crossroads. When the Bengals called, though, he was more than ready and in the best shape of his life. And for that, he credits his off-season.

The Sportsman follows Dhani's discovery that the parts of his life that, to many, seemed to be distractions -- including an off-season TV show that sent him around the world to learn and compete in other sports -- actually served to cross-train him in ways he'd never imagined. It made him more grounded, globally aware and, most surprisingly, a much better football player.

Part travelogue, part workout guide, The Sportsman is an invigorating account of Dhani's global sporting adventures and the lessons he has learned along the way. From dragon boat racing in Singapore to carrying 300-pound rocks in Iceland to biking in Italy, Dhani's adventures taught him to be tougher, smarter, and stronger than ever.