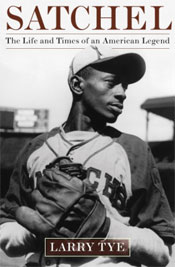 Through extensive research and hundreds of interviews with Negro Leaguers, Major Leaguers, family and friends. Larry Tye has tracked down the truth about Satchel Paige, the majestic and enigmatic pitcher. Through Paige's hardscrabble years in Jim Crow Alabama to his time with the Kansas City Monarchs, one of the powerhouses of the Negro Leagues, Tye dissects his mastery of pitching, his accuracy, power and velocity, and his signature pitch, the sizzler. He reveals how Paige, hurt and angry when Jackie Robinson beat him to the Majors, emerged at the age of 42 to help propel the Cleveland Indians to the World Series.

Larry Tye was a prize-winning journalist at The Boston Globe and a Nieman Fellow at Harvard University. An avid baseball fan, he now runs a Boston-based training progrm for medical journalists. He is th author of The Father of Spin, Home Lands, and Rising from the Rails.