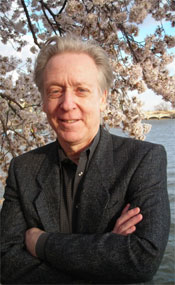 American Emperor traces Burr from the threshold of the presidency in the contested election of 1800, through his duel with Alexander Hamilton, and then across the American West. A daring and perhaps deluded figure whose political career was in tatters following his indictment for Hamilton's murder, Burr conceived and plotted an insurrection in New Orleans and an invasion of the Spanish colonies of Mexico and Florida.Thomas Jefferson finally had Burr arrested and charged him with treason. Burr led his own legal defense in an historic treason trial before Chief Justice John Marshall, winning an acquittal and freedom.

David O. Stewart is the author of The Summer of 1787. He has practiced law in Washington, D.C., for more than a quarter century. He served as law clerk to Justice Lewis Powell of the U.S. Supreme Court and has argued appeals before the Supreme Court.

The Ivy Bookshop will have copies of the book for sale at the program.