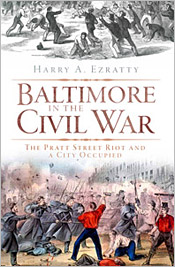 On April 19, 1861, the first blood of the Civil War was spilled in the streets of Baltimore. En route to Camden Station, Union forces were confronted by angry Southern sympathizers. At Pratt Street the crowd rushed the troops, who responded with lethal volleys. Four soldiers and twelve Baltimoreans were left dead. Marylanders unsuccessfully attempted to further cut ties with the North by sabotaging roads, bridges and telegraph lines. In response to the "Battle of Baltimore," President Lincoln declared martial law and withheld habeas corpus in much of the state. Author Harry Ezratty skillfully narrates the events of that day and their impact on the rest of the war, when Baltimore became a city occupied.