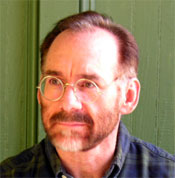 Ron and his girlfriend Jill bought an old condemned fraternity house in Baltimore and gave it new life, despite the fact that neither of them knew anything about home renovation. Their realtor, friends and parents told them they were mad as March hares to attempt it. Ron and Jill's story of anguish, love, and the ultimate "American Dream" of home ownership offers inspiration, insight, and hilarity. In 2008, This Old House magazine published a feature story about their work, and it drew more than 40,000 readers to the magazine's website.

Ron Tanner teaches writing at Loyola University in Baltimore and directs the Marshall Islands Story Project (mistories.org). He is the author of two books: Kiss Me, Stranger and Bed of Nails, which won both the G.S. Sharat Chandra Award and the Towson Prize for Literature. He has won many other literary prizes as well, including a Faulkner Society gold medal, a Jack Dyer Fiction Prize, and a Pushcart Prize.