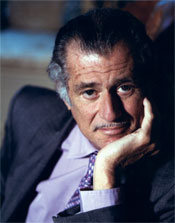 Over Time is as unconventional and wide-ranging as Frank Deford's remarkable career. Fresh out of Princeton in 1962, Deford joined Sports Illustrated. They called him "the Kid," and he made his reputation with dumb luck, discovering fellow Princetonian Bill Bradley and a Canadian teenager named Bobby Orr. In this charming memoir, Deford traces the entire arc of American sports writing and gives us a tour of great American sports literature.

A Baltimore native, Frank Deford has written 18 books, won a Peabody and an Emmy, and read more than 1,500 commentaries on NPR's Morning Edition. He is senior contributing writer at Sports Illustrated and is a regular correspondent on Real Sports with Bryant Gumbel on HBO. Among his many honors: he has been elected to the Hall of Fame of the National Association of Sportscasters and Sportswriters; has been voted U.S. Sportswriter of the Year six times; and was twice voted Magazine Writer of the Year by the Washington Journalism Review.