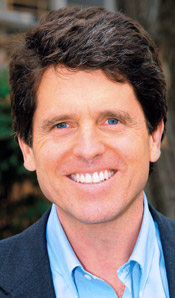 When Sargent "Sarge" Shriver, founder of the Peace Corps and architect of President Johnson's War on Poverty , died in 2011, thousands of tributes poured in from friends and strangers around the world. These tributes, which extolled the daily kindness and humanity of "a good man," moved Shriver's son Mark more than those lauding Sarge for his big-stage, headline-making accomplishments. After a lifetime searching for the path to his father's success in the public arena, Mark instead turns to a search for the secret of his father's joy, his devotion to others, and his sense of purpose. In A Good Man, he writes about his relationship with his father and his quest to understand the principles by which his father lived his extraordinary life.

Mark Shriver is the senior vice president of U.S. Programs at Save the Children in Washington, D.C., and a former Maryland state legislator. He also started the Choice Program and served on the coalition to create the National Commission on Children and Disasters following the devastation of Hurricane Katrina.