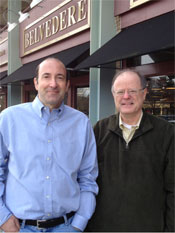 Millions of people got their introduction to Baltimore by watching "The Wire." The show examined some very difficult urban problems. For example, did Omar Little die of lead poisoning? Can children like Wallace and Dukie be saved? Tapping Into "The Wire" uses the television series as a road map for exploring connections between inner-city poverty and drug-related violence. Dr. Peter Beilenson and Patrick McGuire have written a compelling, highly-readable examination of urban policy and public health issues impacting cities across the nation. Each chapter recounts scenes from "The Wire," placing the characters' challenges into the broader context of public policy.

Dr. Peter Beilenson is Howard County's health officer. From 1992 to 2005 he served as Baltimore City's health commissioner. Patrick McGuire is a journalist with more than 20 years' experience, fourteen of which were at the Baltimore Sun.