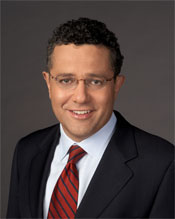 The relationship between Barack Obama's White House and John Roberts' Supreme Court has been rocky from the start, when Chief Justice Roberts flubbed the Oath of Office at President Obama's inauguration. Both men are young, brilliant, charismatic, determined to change the course of the nation -- and completely at odds on almost every major constitutional issue. Award-winning journalist and author Jeffrey Toobin offers an insider's account of this ideological war in his latest book, The Oath.

Jeffrey Toobin, staff writer at The New Yorker and legal analyst at CNN, is the author of The Nine, Too Close to Call, A War Conspiracy, and The Run of His Life.