Home /  Books & More / Live From the Pratt / Michael I. Meyerson 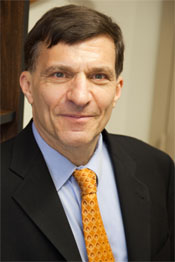 For more than two centuries, Americans have debated the concept of freedom of religion. Did the Founding Fathers intend to create a Christian nation, or a government based on total exclusion of religion in the public sphere?

In Endowed by Our Creator, Michael Meyerson shows that the framers of the Constitution understood that the American government should not acknowledge religion in a way that favors any particular creed or denomination. Nevertheless, the framers believed that religion could instill virtue and help to unify a diverse nation. Through their writings and their decisions, the framers affirmed that respect for religious differences is a fundamental American value. Now it is for us, Meyerson concludes, to determine whether religion will be used to alienate and divide or to inspire and unify our religiously diverse nation.

Michael I. Meyerson is Wilson H. Elkins Professor of Law and Piper & Marbury Faculty Fellow, University of Baltimore School of Law. He is the author of Liberty's Blueprint, a history of the writing of of the Federalist Papers.