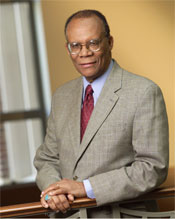 Thurgood Marshall was the most important American lawyer of the 20th century: he transformed the nation's legal landscape by challenging racial segregation; he won 29 of 33 cases before the U.S. Supreme Court; he was a federal appeals court judge, served as the U.S. solicitor general, and for 24 years sat on the Supreme Court.

Marshall is best known for achievements after he relocated to New York in 1936 to work for the NAACP. But Marshall's personality, attitudes, priorities, and work habits had crystallized during earlier years in Maryland. Young Thurgood is the first close examination of the formative period in Marshall's life. It reveals how Marshall's distinctive traits were molded by events, people, and circumstances early in his life.

Larry Gibson presents fresh information about Marshall's family, youth, and education. He describes Marshall's key mentors. the special impact of his high-school and college competitive debating, his struggles to establish a law practice during the Great Depression, and his first civil rights cases. Gibson sheds new light on the NAACP and its first lawsuits in the campaign that led to the 1954 Brown v. Board of Education school-desegregation decision. He also corrects some of the often-repeated stories about Marshall that are inaccurate.

Larry S. Gibson is a professor of law at the University of Maryland School of Law where he has been on the faculty for 39 years. He is also a practicing lawyer with the firm of Shapiro, Sher, Guinot, and Sandler.