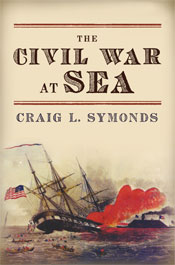 Craig Symonds, professor emeritus of history at the U.S. Naval Academy, presents a masterful history of the Civil War navies, both Union and Confederate, and places them within the broader context of the emerging industrial age. He begins with an account of the dramatic pre-war revolution in naval technology which was epitomized in the famous "Battle of the Ironclads." He offers an overview of Lincoln's blockade of the South, discusses the naval war for control of the rivers in the West, and looks at the important siege of Charleston which lasted three years. Symonds concludes with three key episodes from the end of the war: the Battle of Mobile Bay, the Battle of Wilmington, and the round-the-world voyage of the CSS Shenandoah.

Symonds is the author of the Lincoln Prize-winning book, Lincoln and His Admirals.