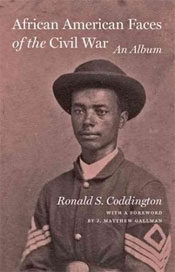 A renowned collector of Civil War photographs and a prodigious researcher, Ronald Coddington combines compelling archival images with biographical stories that reveal the human side of the war. During the Civil War, 200,000 African American men enlisted in the Union army or navy. Some of them were free men, some escaped from slavery, and some were released by sympathetic owners to join the war effort. African American Faces of the Civil War tells the story of the Civil War through the images of men of color who served as servants, laborers, enlisted men, and junior officers.

Ronald Coddington is assistant managing editor at The Chronicle of Higher Education. His work has appeared in USA Today, The Atlanta Journal-Constitution, and the San Jose Mercury News. He is a contributing writer to the New York Times "Disunion" series and writes a monthly column for The Civil War News. He is author of Faces of the Confederacy and Faces of the Civil War, also published by Johns Hopkins University Press.