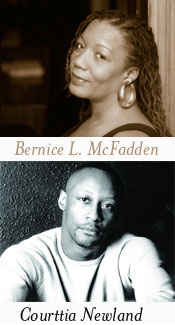 Bernice McFadden's classic novel, Nowhere Is a Place, isabout a young woman's journey of self-discovery and a road trip with her mother, told from the young woman's and the mother's point of view. McFadden is the author of eight novels including Sugar, Gathering of Waters, and Glorious.

Courttia Newland's new novel, The Gospel According to Cane, tells the story of a woman torn apart by the abduction of her son and the dissolution of her marriage. Years later, once she has pieced together what is left of her life, a young man claiming to be her son follows her wherever she goes.Courttia Newland is the author of six novels including Music for the Off-Key and A Book of Blues. He is coeditor of IC3: The Penguin Book of New Black Writing in Britain.