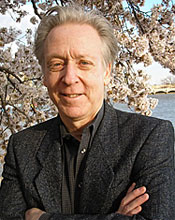 The DaVinci Code for the Lincoln assassination, David O. Stewart's debut novel explores the dark forces behind the John Wilkes Booth conspiracy in an attempt to solve one of the most intriguing puzzles in American history. Blending real and historical characters, The Lincoln Deception is a superbly-researched and gripping mystery. Stewart is the author of three award-winning nonfiction books of American history: American Emperor, Impeached and The Summer of 1787.