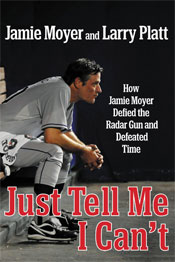 Just Tell Me I Can't: How Jamie Moyer Defied the Radar Gun and Defeated Time is pitcher Jamie Moyer's memoir, (written with Larry Platt). Longtime baseball fans have known Jamie Moyer's name for more than 25 years because he pitched in the big leagues through four different decades beginning in the mid-1980s. Moyer's won-lost record actually got better as he got older. He is only a few wins shy of 300 for his career.

Just Tell Me I Can't provides a frank, intimate look at the mystery and mastery of pitching. Moyer also reveals the powerful teachings of Major League Baseball's best kept secret, sports psychologist Harvey Dorfman. With Dorfman's guidance, Jamie Moyer began to reinvent himself in his mid-20s and went from being a marginal big leaguer to one of the winningest pitchers of all time, a Major League All-Star and a World Series champion.