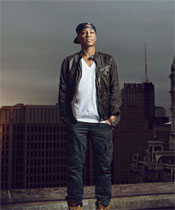 MK Asante was born in Zimbabwe to American parents. A little more than a decade later, he found himself alone in North Philadelphia -- his mother in a mental hospital, his father gone, his older brother in prison on the other side of the country -- forced to find his own way. Asante sought refuge in the poetry of hip-hop giants -- from Tupac to Jay-Z to Nas -- and later in the words of Kerouac, Whitman, Orwell, and even the diary of his own mother. Buck: A Memoir is the unforgettable story of Asante's rise from dealer and delinquent to writer, filmmaker, poet, and professor.

MK Asante is professor of creative writing and film at Morgan State University. He received the Langston Hughes Award in 2009, and won the Jean Corrie Prize from the Academy of American Poets for his poetry collection Like Water Running Off My Back. He directed The Black Candle, a film he co-wrote with Maya Angelou, and he directed and produced the award-winning film 500 Years Later.