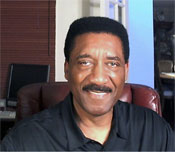 Reginald F. Lewis became the CEO of a billion dollar conglomerate, TLC Beatrice, while in his forties. What prepared him for his role as one of the world's most respected executives? Lin Hart grew up with Lewis in Baltimore and roomed with him at Virginia State University. Focusing on the ten years between 1956 and 1966, Hart draws on shared experiences and memories to tell Lewis' story: his will to succeed, his supreme confidence, and his unrelenting pursuit to move beyond the ordinary to become extraordinary.