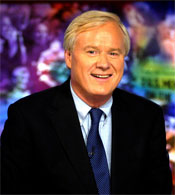 As Tip O'Neill's former chief of staff, Chris Matthews is uniquely qualified to write this firsthand, one-of-a-kind story of the friendship between President Ronald Reagan and the Speaker of the House. They were the political odd couple -- the two most powerful men in the country, who, Matthews says, "couldn't be more different or more the same." Their philosophies were miles apart -- Reagan intent on scaling back government, O'Neill fervent in defending it. Yet there was common ground and a mutual respect both political and personal. Matthews brings this unlikely friendship to life and shows how bipartisan cooperation can work.

Chris Matthews is the host of MSNBC's Hardball. He is the author of six bestselling books, including Jack Kennedy: Elusive Hero.