Home /  Books & More / Live From the Pratt / An Afternoon of Poetry

An Afternoon of Poetry 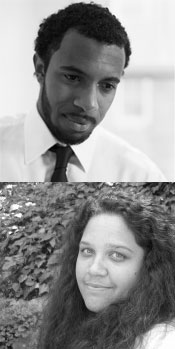 Kyle Dargan is the author of three collections of poetry, Logorrhea Dementia (2010), Bouquet of Hungers (2007) and The Listening (2003). For his work, he has received the Cave Canem Poetry Prize, the Hurston/Wright Legacy Award, and grants from the D.C. Commission on the Arts and Humanities. Dargan has partnered with the President's Committee on the Arts and Humanities to produce poetry programming at the White House and Library of Congress. He is currently an assistant professor of literature and creative writing at American University and the founder and editor of POST NO ILLS magazine.

Amber Flora Thomas is the recipient of several major poetry awards, including the Dylan Thomas American Poet Prize, Richard Peterson Prize and Ann Stanford Prize. Her published work includes Eye of Water (2005) which won the Cave Canem Prize and The Rabbits Could Sing (2012). She is assistant professor of English at East Carolina University.