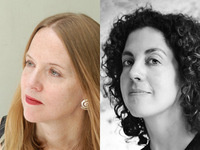 Sarah Arvio’snight thoughts: 70 dream poems & notes from an analysis(Knopf 2013) is a hybrid book: poetry, memoir and essay. Her earlier books areVisits from the SeventhandSono: cantos(Knopf, 2002 and 2006). She has been awarded the Rome Prize of the American Academy of Arts and Letters, and Guggenheim and Bogliasco Fellowships, among other honors. For two decades a translator for the United Nations in New York and Switzerland, she has also taught poetry at Princeton. A lifelong New Yorker, she now lives in Maryland, near the Chesapeake Bay. In a review ofnight thoughts, Grace Cavalieri writes, "Who does not love the nighttime mind with its full disclosure, lack of censor—metaphor, innuendo, enchantment, intensity? Sarah Arvio breaks the codes through psychoanalysis and converts her thoughts to poems. [...] From the uncomfortable silence of the psyche’s tundra, Arvio wrings out her truth."

Lia Purpurais the author of seven collections of essays, poems and translations, most recently,Rough Likeness(essays) andKing Baby(poems). Her new collection of poems,It Shouldn't Have Been Beautiful, comes out next year with Viking Penguin. Her honors include a Guggenheim Foundation Fellowship, National Book Critics Circle Award Finalist, National Endowment for the Arts and Fulbright Fellowships, three Pushcart prizes, the Associated Writing Programs Award in Nonfiction, and the Beatrice Hawley, and Ohio State University Press awards in poetry. Recent work appears inAgni,Field,The Georgia Review,Orion, The New Republic,The New Yorker,The Paris Review,Best American Essays, and elsewhere. She is Writer in Residence at The University of Maryland, Baltimore County, a member of the core faculty at the Rainier Writing Workshop, and teaches at writing programs around the country, including the Breadloaf Writers’ Conference. She lives in Baltimore, MD.