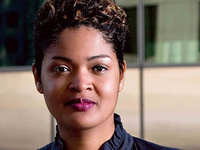 Twelve Years a Slave, published in 1853 and the inspiration for the 2013 motion picture, tells the story of a free-born African American from New York State who was kidnapped into slavery in 1841. A new edition of Northup's memoir, edited and with an introduction by Dr. Dolen Perkins-Valdez, was issued in November.

Dolen Perkins-Valdez is the author of the bestselling novel, Wench, for which she received the First Novelist Award by the Black Caucus of the American Library Association. In 2011, she was a finalist for two NAACP Image Awards and the Hurston-Wright Legacy Award for fiction.