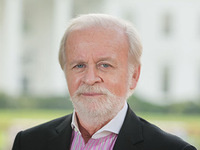 John Rizzo talks about his new book, Company Man: Thirty Years of Controversy and Crisis in the CIA.

Company Man is John Rizzo's insider memoir of his career at the CIA under eleven CIA directors and seven Presidents. During a crisis, said former CIA Director George Tenet, "You don't call in the tough guys; you call in the lawyers." From 1976 to 2009, John Rizzo was the lawyer they called. He made legal calls on virtually every major CIA issue of the past 30 years, from rules governing waterboarding and drones to answering for the Iran Contra scandal. Following 9/11 Rizzo was the CIA's top lawyer.