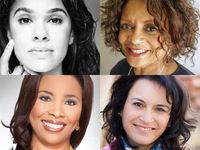 Four women writers discuss the intersection of place, time and culture in literature and in the lives of women. The conversation will be moderated by Linda A. Duggins of Hachette Book Group.

Misty Copeland (Life in Motion: An Unlikely Ballerina), the first African-American soloist in the last two decades at the American Ballet Theatre, has written a memoir about her inspiring journey to become a professional dancer.

Deborah Johnson (The Secret of Magic) writes about the postwar American South, its people, both black and white, at a time of wrenching yet hopeful change. She is the author of an earlier novel, The Air Between Us.

Sujata Massey (The Sleeping Dictionary) won Agatha and Macavity awards for her Rei Shimura mystery series. Her new book is the first in a series of historical suspense novels featuring Bengali women and the independence movement in India.

Lauren Francis-Sharma ('Til the Well Runs Dry) tells the story of a young Trinidadian woman, her two sons, the young policeman who loves her -- and the family secret she's guarding.

The Ivy Bookshop will have copies of the authors' books for sale at a reception and book signing following the program.

Presented in partnership with the Antigua & Barbuda International Literary Festival and the Baltimore Times.