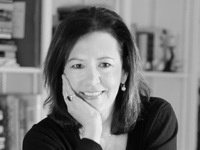 Marianne Szegedy-Maszak talks about her book, I Kiss Your Hands Many Times: Hearts, Souls, and Wars in Hungary.

Marianne Szegedy-Maszak's parents, Hanna and Aladar, met and fell in love in Budapest in 1940. He was a rising star in the foreign ministry, a vocal anti-Fascist who was in talks with the allies when he was arrested and sent to Dachau. Hanna was the granddaughter of Manfred Weiss, the patriarch of an aristocratic Jewish family that owned factories, were patrons of intellectuals and artists, and entertained dignitaries at their baronial estates. Szegedy-Maszak's family memoir tells the story of her parents' marriage and journey to the United States. It is also the story of the complicated relationship that Hungary had with its Jewish population.

Marianne Szegedy-Maszak is an award-winning journalist who has worked as a reporter at the New York Post, an editor at Congressional Quarterly, a professor of journalism at American University, and as a senior writer at U.S. News & World Report.