An Evening with Elizabeth Nunez and Bernardine Evaristo, in conversation with Greg Sesek 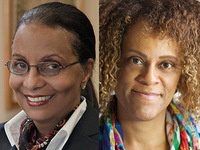 Elizabeth Nunez and Bernardine Evaristo talk about the writing life and read from their new books.

Not for Everyday Use is a riveting memoir in which Elizabeth Nunez wrestles with her mother's determination to have her leave her Trinidadian homeland for America. Nunez is the award-winning author of eight novels; she serves as Distinguished Professor at Hunter College, CUNY, where she teaches fiction writing.