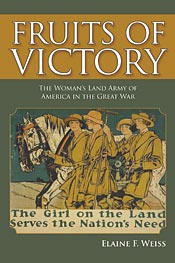 From 1917 to 1920 the Woman's Land Army (WLA) brought thousands of city workers, society women, artists, business professionals and college students into rural America to take over the farm work after men were called to wartime service. Wearing military-style uniforms, the women lived in communal camps and did what was considered men's work -- plowing fields, driving tractors, planting and harvesting crops.

Elaine Weiss, a Baltimore-based journalist, tells the story of the women who kept the farms going while the soldiers were "over there."