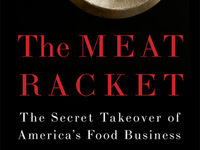 Investigative reporter Christopher Leonard reveals how a handful of companies have seized the nation's meat supply and created a system that puts farmers on the edge of bankruptcy, hikes up Americans' grocery bills, and places the greatest capitalist country in the world under an oligarchy controlling much of the food we eat.

Christopher Leonard is the former national agribusiness reporter for the Associated Press and a fellow with The New American Foundation in Washington, D.C.