Home /  Books & More / Live From the Pratt / My Brother's Keeper: Can the President…

My Brother's Keeper: Can the President Make Progress for Boys & Men of Color? 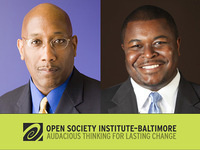 "By almost every measure, the group that is facing some of the most severe challenges in the 21st century, in this country, are boys and young men of color." -- President Obama

Join us in a discussion about President Obama's recently launched "My Brother's Keeper," an initiative created to advance the achievement of boys and young men of color. Despite their socio-economic backgrounds, young men of color are disproportionately more likely to become involved in the criminal justice system and to be victims of violent crime. They are also more likely to be expelled and suspended from school and disconnected from the labor force.

Joe Jones, CEO of the Center for Urban Families, will discuss the innovations that are already beginning to create meaningful change in Baltimore, and Damon Hewitt, Open Society Foundations' senior advisor for special projects, will share information on what is occurring across the country.

Joe Jones is a national leader in workforce development, fatherhood and family services programming, and, through his professional and civic involvement, influences policy direction nationwide.

Damon Hewitt was a director at the NAACP Legal Defense and Education Fund where he worked on public outreach for education equality issues such as school integration, fiscal equity, affirmative action, and school discipline. He has been directly involved in the communications between the White House and the Open Society Foundations' collaboration for My Brother's Keeper.

This event is part of OSI-Baltimore's Talking About Race series.