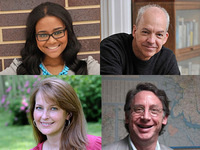 Sheri Booker, teacher at Baltimore Leadership School for Young Women is the 2014 winner of the NAACP Image Award for outstanding literary work by a debut author for her memoir, Nine Years Under: Coming of Age in an Inner City Funeral Home.

Award winning local author and former Baltimore Sun writer Dan Fesperman’s travels as a writer have taken him to thirty countries, three war zones and have proved great material for his many novels, including The Double Game, now available in paperback.