Craig L. Symonds, Neptune: The Allied Invasion of Europe and the D-Day Landings 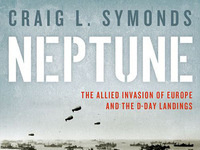 On June 6, 1944, 160,000 Allied troops landed on the beaches of Normandy to battle German forces. It was the greatest sea-borne assault in human history. The invasion, and the victories that followed, would not have been possible without Neptune, the massive naval operation that led to it.

Craig L. Symonds, professor of history emeritus at the U.S. Naval Academy, is the author of many books on American naval history, including The Battle of Midway and Lincoln and His Admirals, co-winner of the Lincoln Prize in 2009.